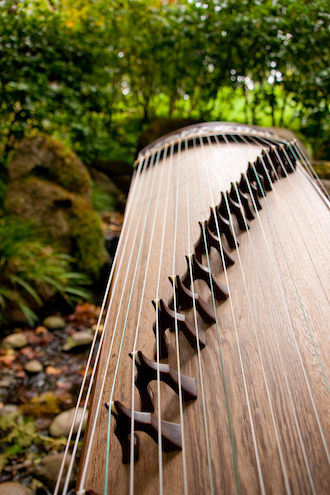 The guzheng dates back over 2500 years to the Warring States period in China. The earliest known form of the guzheng, constructed out of bamboo and fitted with five silk strings, comes from the state of Qin, which is why the guzheng is also known as the “Qin zheng”. This early instrument was tuned to a pentatonic scale, utilizing the notes DO, RE, MI, SO, and LA, a scale that has not changed and is still used to tune the guzheng today.

Throughout Chinese history the guzheng has been important to both the imperial court, the literati and to the common people. During the prosperous Tang Dynasty (618 – 907 CE) the guzheng’s basic form changed, with an enlarged sound box constructed from wutong wood (paulownia elongata) and increasing the number of strings from five to thirteen. The instrument was so popular that it traveled along the Silk Road and new forms of the guzheng started to take root in the culture of Japan, Korea, Vietnam and other Asian countries.

During the last century, as China saw the fall of its last imperial dynasty and the rise of a new central government, the guzheng continued to develop. The various schools of folk music were deeply rooted in the cities and villages, and in 1948 the renowned musician and teacher, Cao Zheng, established the first university level guzheng program in China. New compositions and a revived interest in the ancient traditions fuel the fervor for guzheng both in China and around the world.

Whether it be the ancient oral tradition of teaching or the present academic education in a conservatory, guzheng is based on a strong emphasis on the traditions of folk and classical guzheng technique and style, and it is from this foundation that we can move forward and look at modern compositions and the future of guzheng.