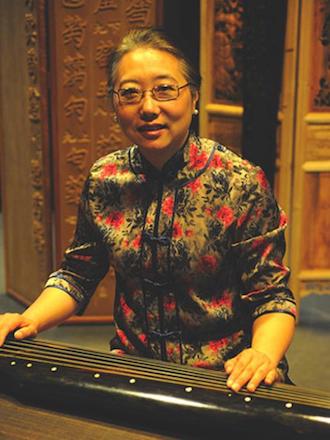 Dai Xiaolian (戴晓莲) was born in Shanghai and started to study the art of guqin playing from an early age, under the tutelage of her granduncle, the renowned guqin master Zhang Ziqian from the Guangling School. Thus her guqin playing was very much grounded in the essence of his teaching. Later on she also received guidance from several guqin masters including Wu Jinglue, Wu Wenguang, Yao Bingyan, Gong Yi, Lin Youren, and Cheng Gongliang. Upon graduating from the Shanghai Conservatory of Music in 1985, she took on the post of associate professor of Chinese Music and supervisor of the Master’s Program at the conservatory.

Dai Xiaolian inherited the rich foundation of the traditional qin study, absorbing the best from various schools of teaching and is one of the foremost exponents of the traditional Chinese art of guqin. At the same time, she is also at the cutting edge of new music, active in the contemporary music scene, performing at numerous art festivals and concerts, and collaborating with many renowned musicians, composers, and orchestras, both in China and abroad. Her unique style of qin playing embodies the flowing and lucid manner of Guangling style combined with her own style and touch. Her interpretation of music pieces is deeply intellectual and elegant. She can play both fast and slow pieces with rigor and grace, applying sophisticated treatment befitting each.

She is also actively involved in guqin related cultural activities. In 2009 she led the planning and organizing of the conference commemorating the 110th birthday of Guqin Master Zhang Ziqian, then edited and published the CD “The Qin Repertoire of Zhang Ziqian”. She also planned and organized the first all China conference on music conservatory teaching and the ensemble of guqin and other music instruments in 2007, as well as coordinated the concerts “Dialogue between a Fisherman & a Woodcutter” and “Guqin Masters Concert”.

Academically, she has participated in various research projects at the conservatory, including research on guqin dapu (interpretation of old tablature), musicology research, and other projects.

Dai Xiaolian helped to form an essential link between historical and contemporary Chinese guqin music. During her career in guqin art, spanning three decades so far, she made significant contributions to the development of contemporary guqin art. Her artistic achievements have been widely acknowledged and well recognized.