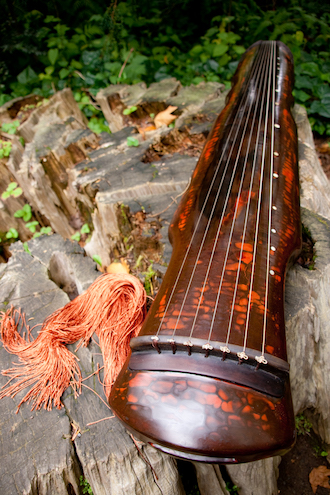 With a history that dates back over 3000 years the guqin holds an important place in Chinese culture. The name itself already signifies its long-standing history in China, “gu” meaning ancient and “qin” being the name of the instrument. The earliest form of the qin was recovered from the tomb of the Marquis of Yi, dated around 433 BCE. Early historical references of the qin can be found in the Shijing or Book of Songs. Various forms of the qin have passed down to us through the centuries because of the lacquering of the instrument which preserves the wood, with one of the oldest playable instruments dating back over a thousand years.

Not only are there ancient instruments in existence, we also have written manuscripts for and about the qin that provide us with a broader understanding of its place in Chinese history and culture. With its own notation, developed over at least 1500 years by scholars, the guqin has over 150 manuscripts in existence dating back 600 years, 3000 pieces of music as well as essays on the philosophical and cultural aspects of the qin and its music.

Guqin endured millennia of political unrest and cultural upheaval and survived. A revived interest in the guqin during the 1950’s has lead to increased scholarship and education in China and the world. In 1977 the United States launched the spaceship Voyager, carrying a gold CD that contained the music of our planet. One of the pieces selected to represent the music of our world was “Flowing Water” by guqin master Guan Pinghu.

As we move forward in the twenty first century, new appreciation and new compositions for guqin help maintain its significance in China and the world, but it is through the strong foundation of teaching, learning, and passing down the millennia old guqin tradition and heritage that keep it grounded.